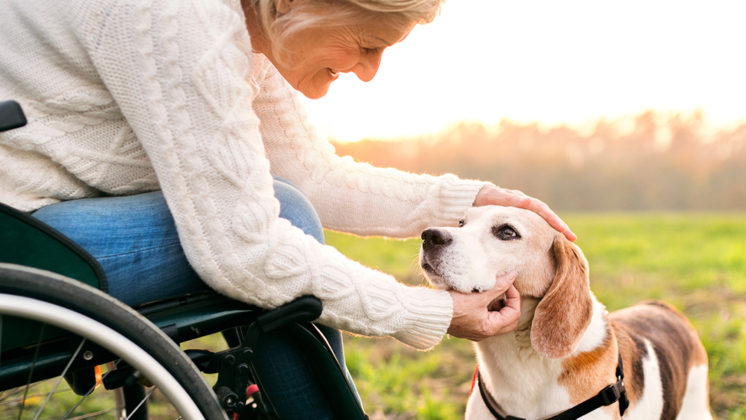 Every winter, my neighbor, Sharon, travels to Mexico for six months with her emotional support dog, a terrier mix named Sophie (not pictured). Sharon has a letter from her doctor, explaining to airline personnel that she suffers from depression and needs Sophie on the plane to feel secure.

The problem is, Sharon isn’t depressed, and she didn’t adopt Sophie as an emotional support dog. Sharon just wants to spend winters in Mexico and doesn’t want her pet stuck in a crate for the flight.

“It’s either this or make her fly in a crate or cargo,” Sharon rationalized when I asked her why she didn’t just put Sophie in a crate under her seat like everyone else. In her mind, Sharon simply found a way to beat the system and make her life more convenient.

But at whose expense?

Many people mistakenly confuse service animals with emotional assistance animals. Yet each type serves a different purpose and has different public access rights.

The ADA doesn’t require a vest, ID or certification for service animals. In fact, a business or other public place can ask only whether the dog is a service animal required because of a disability, and what work or task the dog is trained to perform. It’s against the law to ask about the nature of the person’s disability.

An ESA, on the other hand, may require a letter from a licensed mental health or medical provider to ride on an airplane or live in housing with a tenant.

There is no official registry for service or emotional assistance animals, so it’s easy to go online and find a company to sell you a letter — one that may or may not be taken seriously by airlines and landlords —declaring a pet an ESA. At the same time, the ADA prohibits digging too deeply into a service dog’s legitimacy.

The most egregious incidents make national news, such as a woman in 2018 who tried unsuccessfully to board a United Airlines Flight at Newark Liberty International Airport with what she claimed was her emotional support peacock.

“We live in an era where people are faking it, and that makes people assume that if you have a service dog, you’re faking it.”
–Rose Reif, Reif Counseling Services

Many states now have laws making service dog or emotional assistance animal fraud a crime. Other states are working on similar legislation. For instance, Michigan introduced a House Bill in September 2019 requiring a therapist who writes an ESA letter for housing to have seen the patient for at least six months.

Falsely portraying a pet as a service or emotional assistance animal harms the people that ADA and ESA laws aim to protect, says Rose Reif, a licensed professional counselor trained to serve people with disabilities and owner of Reif Counseling Services in Cary, North Carolina.

“We live in an era where people are faking it, and that makes people assume that if you have a service dog, you’re faking it,” says Reif. “This causes everybody to be on alert and assume they can tell a real service dog from a fake one.”

One day in line at a big box store, Lauren Burke and her diabetes alert service dog, Ricki, had to get away from two little dogs, one snarling from a stroller and the other straining at the end of a retractable lead. Burke glared at the little dogs’ owner.

“They’re service dogs, and you can’t say anything!” the woman snapped. Burke, who works for Early Alert Canines in Concord, California, the organization who trained and placed Ricki, who alerts Burke when her blood sugar level drops, had her doubts.

“Anyone with a trained service animal acting like that would have been mortified and halfway out the door at that point,” says Burke. “Having fake service animals out there makes people leery of those that have legitimate service animals.”

Many of Reif’s clients are traumatized by altercations with people who confront them in public, accusing them of service dog fraud.

Burke tells the story of one of Early Alert’s diabetic service dog clients who was accosted by an angry retail customer who yelled at her, accusing her of being a service dog faker. “That’s not a real service dog! You’re abusing the system!” the man bellowed as security staff escorted him from the premises.

Many of Reif’s clients are traumatized by altercations with people who confront them in public, accusing them of service dog fraud. Reif has even seen war veterans with PTSD assistance dogs wear a t-shirt in public proclaiming “military veteran” to calm suspicion. “They’re fearful to go out in public places with their service dogs, says Reif. ”Some avoid socializing.”

Taking it upon yourself to determine a service dog’s legitimacy isn’t the way to go, Reif says. “It would be like if someone was in a wheelchair and a person came up and said, ‘You don’t need that. Get up and walk,’” says Reif.

Admittedly, I think less of my friend Sharon for taking advantage of rules in place to help disabled people. To me, procuring a letter for her fake emotional assistance animal is akin to parking in a handicapped space when in a hurry, or renting a wheelchair for your child so you can be first in line at amusement park rides.

Still, there isn’t much I can do to stop her, since she has the required ESA letter from her doctor. Despite Sharon’s ESA fraud, she’s typically a kind and generous person who probably has no idea of the ripple effects of her actions. Will I rat Sharon out to the airline? Probably not.

Instead, I’ll talk to my friend before she and Sophie travel. I doubt she’ll welcome my perspective, though. That’s okay. Sharon can always bring Sophie along for emotional support.

Falsely portraying a pet as a service or emotional assistance animal harms the people that ADA and ESA laws aim to protect.