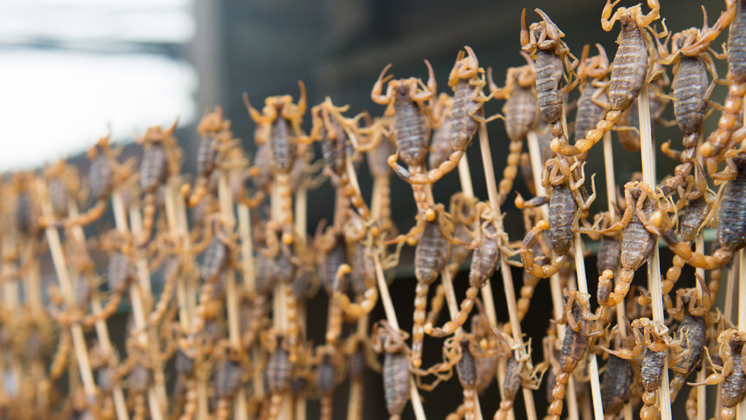 America is no stranger to odd culinary trends.

Whether time, convenience, or innovation was the culprit behind these fads, many have stuck around in our memories far longer than they’ve appeared on our tables. (Others, you may be eating while you read this.)

The dish was invented at New York City’s Delmonico restaurant when famed sea captain Ben Wenberg visited the establishment and recommended a new way of cooking lobster he’d picked up on his voyages. It essentially involved cooking lobster in a very creamy, buttery sauce.

The dish lived on as an after-theatre favorite after Ben Wenberg and Charles Delmonico had a falling out, but the name was changed from Lobster a la Wenberg to Lobster Newberg.

Partially thanks to the convenience of canned food, glasses full of the canned peach, pear, and cherry mixture made their rounds through plenty of parties and events.

There’s even a National Fruit Cocktail Day commemorating the treat that lands every May 13.

Yum, canned meat! The non-perishable protein rose to popularity in the aftermath of the Great Depression and World War II, in which rations were tight and fresh meat was a rarity.

SPAM’s affordability and convenience made it a quick favorite in American homes, and it continues to be a wildly popular food in Hawaii to this day.

While it seems like a stretch to call a dish based on gelatin a “salad,” that’s exactly how this dish has been marketed and branded.

The first sighting of it was back in 1904 when something called “Perfection Salad,” a salad encased in a Jell-O mold, won a recipe contest.

The dish really took off as a kid-pleasing, easy-to-make housewife favorite in the late ’50s and ’60s, and Jell-O even released flavors like celery and seasoned tomato (since discontinued) to appease those with a taste for savory treats.

One of the less exciting challenges of spaceflight: figuring out what astronauts were supposed to eat up there.

For engineers trying to squeeze every ounce of efficiency out of the limited room inside the Apollo spacecraft, regular food was clearly too heavy.

But freeze-dried food? Practically weightless. Enter the trend of freeze-dried ice cream, basically sugar mixed with air – and with the added benefit that kids could pretend to be astronauts while eating it. It’s still available online… but thankfully has largely been eclipsed by good old regular ice cream.

If there’s one thing we know about Americans, it’s that plenty of us love a salad that doesn’t contain too many vegetables. Pasta salad still graces many July 4 BBQ tables, but its popularity as a restaurant staple has waned in the face of gluten-free trends and lower-carb diets.

But when scrambling for a meal to make with leftovers, throwing yesterday’s pasta together with some meat and a few veggies doesn’t sound like the worst idea.

As the country emerged out of economic recession, people began spending money on elegant desserts again, ushering in a new era of blending breakfast and sweets. Everything from maple-bacon donuts to bacon-infused chocolate bars and caramelized bacon cupcakes became available, and the nation became obsessed with the smokey, salty twist on sugary classics.

There’s no telling what strange creation will be come America’s party favorite next. And hey, if some of these are still your favorite treats, no judgement.

Not to yuck anyone’s yum, but you might want to check those cholesterol levels if some of these are still a major player in your diet.