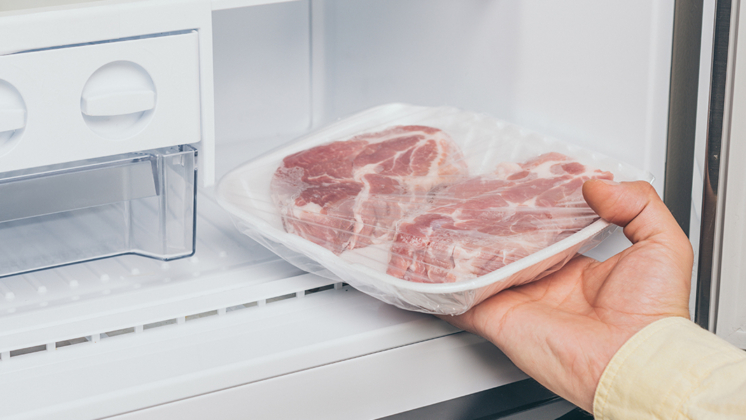 The lives of certain foods can be extended by storing them in your freezer, and they’ll taste as good as they did when you put them in there. But for other foods and ingredients, your freezer is not your friend. Leave these items in the fridge if you want them to stay fresh.

Whole eggs should be kept out of the freezer. The egg could expand and crack the shell, allowing bacteria to creep in. Even if the shell remains intact, the yolk will become syrupy and hard to blend with the egg whites, according to the USDA. Similarly, icings or sauces made with eggs can turn tough or rubbery in the freezer.

Soft cheeses, like goat, brie, and ricotta, tend to separate and take on a grainy texture when frozen. Hard cheeses, like cheddar, can hold up better in the freezer — though they could also turn mealy.

Almost all dairy products are not freezer-friendly. Sour cream separates and becomes watery, and cream, yogurt, milk and milk-based sauces may curdle and separate.

Some produce, especially fruits and vegetables with high water content, will be limp, soggy, and possibly have a change in flavor or smell after freezing and thawing. Lettuce, cucumbers, cabbage, and watermelon are all better off in the fridge.

Other produce, like tomatoes, can be frozen but should only be used in cooking, since they become mushy after thawing, according to the Institute of Agriculture and Natural Resources at the University of Nebraska-Lincoln.

Unless they’re French fries, potatoes don’t hold up well in the freezer. Depending on their preparation before freezing, they’ll turn mushy, mealy, watery, or tough. If you have lots of potatoes on your hands, try making a batch of freezer fries. See a recipe here.

Salad dressings and condiments like mayonnaise are better left in the fridge. Although they’re safe to eat after thawing, freezing will make the ingredients separate. The eggs, oil, and vinegar in mayo will all separate, leaving liquid on top of the mayo. Attempting to return it to its original texture might not work, and if it does, you’ll have a thinner, watery substance left.

Most spices and seasonings should be stored exclusively on your spice rack.

Freezing does not extend the shelf life of spices, and according to the NCHFP, freezing causes taste and flavor changes. Garlic, pepper, and imitation vanilla will become bitter, onion and paprika may change flavor, and curry is known to “develop a musty off-flavor.” Yuck!

Fresh herbs, on the other hand, can be frozen, but use them for flavoring only — they become soggy and limp, not the best bet for a pretty garnish.

The yummy crispiness we love about fried foods disappears after a trip to the freezer, because thawing makes formerly crunchy foods waterlogged and soggy.

The exception here is homemade French fries, which can be cooked, frozen, and cooked again without thawing first. They’ll still taste good and crisp up, plus you can make them healthier by limiting the amount of oil and fat you use to make them.

Some fresh pastas can be kept in the freezer before cooking, but stick to the fridge for storage after cooking. Freezing cooked pasta will turn it into a mushy mess, and give it a weird “warmed over” taste to boot.