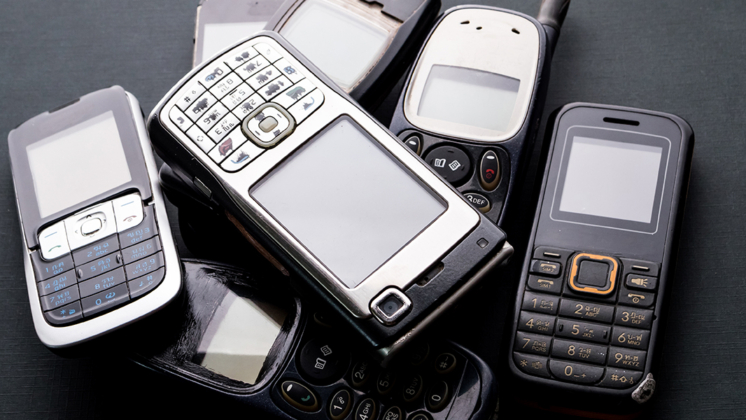 As far as clutter is concerned, old clothes, books, papers, furniture, and cookware are increasingly taking a back seat to cell phones, laptops, cables, and probably an old cassette or CD player.

The trouble is, you can’t always just toss those devices in the garbage or leave them on the street for pick up.

Most electronics contain materials that are toxic and hazardous to the environment, not to mention precious materials.

TVs, computers, and cell phones, for example, have heavy metals such as mercury, lead, and arsenic, which are at risk of leaking into the ground in landfills.

What’s more, many of the metals in cell phones, such as copper, gold. silver, and palladium, are rare or precious; recycling them can help the metals be recovered and reused.

While there’s no federal law that prohibits the tossing of many electronics other than refrigerators and cathode-ray tube (CRT) televisions, which have freon and lead glass, respectively, about 25 states, including California, Illinois, New York, and Texas, have strict laws requiring green disposal of e-waste.

Even in the states that have no bans, some cities and counties may have passed electronics recycling laws.  For more information on local regulations, check with the Electronics Take Back Coalition website.

But even if you are technically allowed to dispose of your electronics with the rest of the trash, the practice is just not good for the earth, especially when there are so many better options from recycling to donating to selling them.

Here are a few tips on getting rid of your gadgets efficiently, safely, and sometimes even profitably.

There are so many options for recycling your electronics that it may well be the easiest and quickest way to get the digital decluttering job done. Many manufacturers, retailers, and even cell phone carriers offer their own programs.

For cell phones, wireless carreirs such as AT&T, Sprint, T-Mobile, and Verizon—not to mention manufacturers including Apple, LG, and Samsung–will let you mail in or return old phones for recycling at retail stores and other drop-off locations.

HP not only accepts printers and computers for recycling, but also the ink and batteries used in those products (and will even give you 15 percent off a new printer when you trade in your old one).

Meanwhile, Staples and Best Buy will recycle most everything they sell for free. BestBuy will even take your old TV—CRT models up to 32 inches and flat panels up to 50 inches—for $25 a pop (not a bad deal considering the former is hard to recycle). The store will even pick up and take away bigger items for a charge.

Meanwhile, Staples and Best Buy will recycle most everything they sell for free.

Many cities and towns have local e-cycling centers and will pick up your stuff along with your other recycling. In addition, many communities organize e-cycling drives on specific days and locations where you can drop off all your old stuff in one fell swoop.

Check TIA E-Cycling Central or Recycle Nation for listings of drives, drop-off centers, and recycling centers near you.

Bonus tip: Before you drop off an item, make sure to take out any removable batteries from laptops, smartphones, cameras, and more. Ditto with printer ink cartridges. These need to be recycled separately.

Making money off your old gadgets is easier than you think. Dozens of electronics-specific “re-commerce” sites such as Gazelle, Gizmogul, Decluttr, and Gone offer user-friendly apps and websites to sell your old smartphones, tablets, laptops, and smart watches.

At Gazelle, for example, the process typically involves entering information about your device—a serial number and condition is all you need, unless you prefer to enter more details manually.

Within seconds, the service quotes you a price, which is good for up to 30 days, and can be cancelled at any time. Then all you have to do is reset and wipe the data off your device and drop it into a prepaid package that Gazelle provides.

Want instant cash? Then just go to one of Gazelle’s more than 3,000 ecoATM kiosks, which conduct product evaluations and dispense cash on the spot assuming the phone is worth something. Newer phones typically fetch higher prices—six month-old iPhones in good condition are about 50% off the original price —but you’d be surprised at how even that old Samsung tablet from 2012 might get you $5.

And even if your device has no value, Gazelle and ecoATM will at the very least recycle it for you, making the clutter disappear instantly.

Unfortunately, Gazelle only buys Mac laptops. Those with Windows or PC laptops, even broken ones, can try SellBroke, which works similarly to Gazelle and other electronics reseller sites by offering free shipping, purchasing, and payment via Google Pay or PayPal. SellBroke also buys used smartphones, tablets, iPods, desktops, cameras, smartwatches, and drones.

To sell other gadgets such as printers, cameras, speakers, video game consoles, headphones, and more, you may need to take the old-fashioned approach and do it on your own. Skip Craigslist, which doesn’t charge any commissions, but also has no real security guarantees and requires that you vet and meet potential buyers yourself.

For a 9% commission, Ebay lets you sell most items in any condition, even broken, and offers security through PayPal transactions and online support and resolution. In addition, you can always auction off items, which potentially offer higher sell prices. Just make sure you pack up and send the items promptly as your seller ratings depend on it.

Like Craigslist, Letgo is useful for big items such as TVs that are easier to unload in person rather than via UPS or FedEx, but also offers some built-in vetting features, including buyer and seller ratings and the ability to chat with a potential customer through the app before you exchange any phone numbers or emails.

Particularly handy is the Letgo mobile app’s ‘Reveal’ tool, which uses image recognition technology to automatically identify whatever it is you’re selling when you take a picture of it, then fills in some description fields on your ad automatically. Letgo also lets you list your stuff for free, if getting rid of it is all you need.

Expert tip: It’s all about timing. The best times to sell phones is before new models are announced, so if you’re seeing headlines about Apple’s upcoming iPhone announcement, it might be time to list your device or lock in a quote from Gazelle.com since the price you can fetch goes down about 10% to 20 % once an iconic new phone comes out.

Likewise around the holidays—from Thanksgiving onwards, you are likely to sell your old tech at a premium, and quickly, as demand is higher. Also, different re-commerce sites offer different prices. To see which one pays the best for what you’re selling, check with Flipsy, which compares the value of your phone on different sites.

Planning to upgrade your iPhone? As with cars, Apple offers a trade-in program that’ll automatically shave pricing off of the latest models, usually anywhere from $75 to $300 off depending on how old your phone is.

If you’re a frequent shopper at big box retailers or online, try Amazon Trade-in, Best Buy Trade-In, or Target Trade-In, each of which offer gift cards in exchange for your old gadgets.

Wait until new iPhones come out before you consider trading in your phone.

While you may fetch more by selling your old device yourself, nothing beats the seamless convenience of trading in your old gadget in person at a store.

Expert tip: Wait until new iPhones come out before you consider trading in your phone. Apple usually offers extra trade-in credit in and around the launches of its latest models (sometimes doubling the amount it usually offers).

From local schools and students in developing countries to veterans and soldiers, there are many people and places that need your old devices.

What’s more, you can get a tax write-off for donating computers and other gadgets that are valued over $1,000. As with selling and trade-ins, cell phones are the easiest to donate.

Cellphones for Soldiers, for example, will refurbish your old phones, tablets, and MP3 players, then resell them, using the proceeds to purchase prepaid calling cards for active duty military overseas, as well as provide emergency funds for veterans.

If you still have a flip phone from 10 years ago, don’t worry: Cellphones for Soldiers will recycle it for you, but you can also donate old phones to Secure the Call, which refurbishes them just for 911 use and sends them to people, institutions, and communities that don’t have easy access to pay phones or other ways to communicate with emergency services.

Desktop computers and flat-screen monitors, laptops, USB keyboards, scanners, routers, projectors, camcorders, webcams, microphones, even thumb and hard drives can be put to good use through the World Computer Exchange, which refurbishes these devices and sends them to schools in more than 79 developing countries around the world, not to mention domestic disaster areas such as Puerto Rico.

The Goodwill E-Cycle program takes in an even broader range of items, everything from the practical (remote controls, modems) to the obsolete (answering machines and pagers) to the collectible (electric typewriters, tape players, stereos). Items are evaluated and then destroyed, recycled, or refurbished and resold.

For some of those less obviously resuable gadgets such as in-car navigation devices, CB radios, or even video game systems, try sending a description of your items to Computers With Causes or Zealous Good.

These organizations will evaluate your potential donations and search for charities that need or have expressed an interest in them.

Even easier, leave your old gadgets in a box outside of your house and let Pickup Please take them for you. With the exception of older CRT or DLP TVs, the organization will pick up just about any small to mid-size electronics, as well as small kitchen appliances, with as little as 24 hours notice.

The donations are auctioned off to resellers and the proceeds are used to fund the  Vietnam Veterans of America.

Expert tip: Whether you’re recycling, selling, trading, or donating your device, make sure to remove your personal information and data from smartphones, laptops, tablets, smart TVs, and any other devices that you’ve signed into.