As a parent or grandparent of a young adult or teen—or a colleague to younger officemates—you may find yourself baffled at times by your electronic conversations. What does that digital icon of (squints) a wink or a smirk or whatever mean? Why am I looking at fruit on my phone?

A lot can be lost in translation when proficient emoji users text or message, well, anyone else. Interpreting emojis presents obvious challenges: They can be difficult to make out, they change all the time, and they can look different for iPhone and Android users.

What’s more, it’s not just a matter of picking out a smile vs. a frown. Emojis truly represent another language, and one that’s still evolving, with subtle meanings known only to seasoned speakers.

Add to that combinations that evoke the board of the classic TV game show “Concentration,” and you can become totally lost.

You may feel like the parents in the 2018 film Blockers, who struggle to decode a series of texts among their high-school daughters, only to learn that the baffling series of fruit and hand emojis add up to a pact to lose their virginity at prom.

And that brings up one more thing: Using emojis can lead you into a minefield of sexually explicit content. More on that later.

To understand what the emojis that pop up on your screen mean—and keep yourself from making an awkward faux pas when you drop one into your messages or social media posts—dive into this guide to the most frequently used ones. 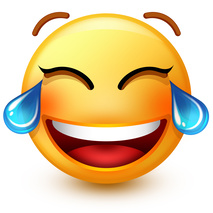 What it looks like: You’re laughing so hard you’re crying.

What it means: What it looks like. You can use this emoji instead of typing “LOL” (short for “laugh out loud,” of course). Variations include the tears of joy cat emoji, or any emoji that pairs a large smile with tears.

Used right: The scene in Blockers when the parents figure out what the eggplant emoji means is ? 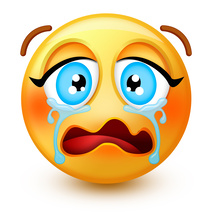 What it looks like: Two rivers of pain pouring down your face

What it means: Sharing this “loudly crying” face does not necessarily mean you are wailing due to pain or anguish, though it can. Often, it can simply indicate intense feelings, from overwhelming joy to side-splitting laughter.

Used right: I caved and bought the discounted Gucci pumps on TheRealReal. They’re so beautiful ???. Can’t even deal. 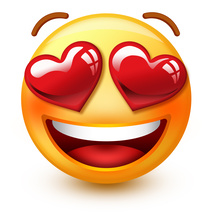 What it looks like: Hearts in place of eyes, which conjure up an image of intense love or infatuation

What it means: That you’re infatuated with a person or a thing, yes. Or it can mean that you’re extremely enthusiastic about something. Interchangeable with its cat emoji variant.

Used right: I’m obsessed with our new marketing plan. I think the Instagram strategy in particular is ? ?. 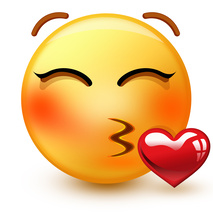 What it looks like: Kiss face emojis come in several varieties. The common thread is puckered lips, and variations include eyes closed, open, or “smiling,” and the addition of a heart, which signals that you’re blowing a kiss.

What it means: This isn’t necessarily a romantic kiss. It’s often used to end a chat with anyone from your mom to your boyfriend.

Used right: OK, I have to be up early tomorrow, so I’m going to sleep. Goodnight! ? 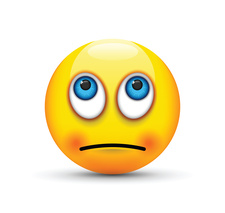 What it looks like: Like an IRL (“in real life”) eye roll, albeit with out-of-proportion facial features

What it means: You’re annoyed, unamused, or, at the very least, dismissive of something. 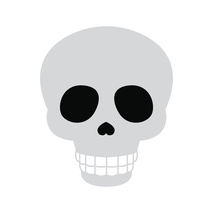 What it looks like: A cartoon skull with freakishly large spaces for the eyes

What it means: Traditionally a skull is a morbid symbol, but in contemporary slang to say you’re “dead” means that something was so funny, so ridiculous, or so jarring as to kill you, so to speak. The skull emoji can also signal fatigue or exhaustion, either from an intense workout or a hangover.

Note: The skull emoji is slightly different than the skull and crossbones emoji, which can indicate that something is dangerous or risky.

Used right: Sorry I missed your call, I had to stay late at the office and of course my boss isn’t paying me overtime.?? 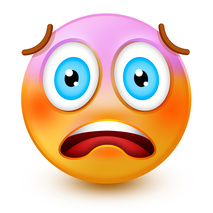 What it looks like: An open-mouth frown with raised eyebrows

What it means: Often mistaken for surprise, the anguish emoji communicates that you’re shocked or dismayed over a piece of information. 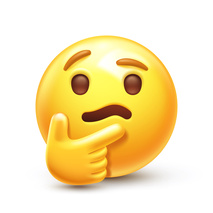 What it looks like: A furrowed brow and a hand on the chin are the hallmarks of this emoji.

What it means: Extreme skepticism. This emoji can also imply that you think the person you are texting with is lying, or saying something that is “sus.” (Don’t know what “sus” means? Consult our guide to millennial slang.)

Thinking face is interchangeable with the detective emoji and the face with monocle emoji.

Used right: He said he had to reschedule our date because he’s sick but I’m like ???? where’s his doctor’s note? 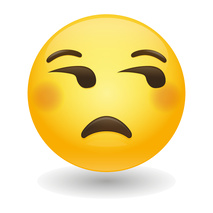 What it means: You don’t want to mess with someone who hits you with the unamused face: Your correspondent is likely irritable or highly displeased, or they find a topic of discussion particularly irksome. 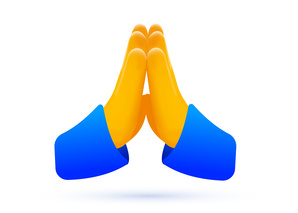 What it looks like: Two hands with palms touching

What it means: This emoji, officially referred to as “folding hands,” can take on several meanings, most frequently prayer or gratefulness or saying “please” or “namaste.” Less frequently, it can be shorthand for teamwork, as in the exact moment when two hands meet in a high five.

Used right: OMG thank you for the meeting reminder, I almost missed it ??? 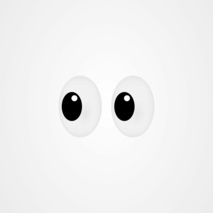 What it looks like: Two faceless cartoon eyes with big black pupils

Be careful: When used to comment on someone’s photo, the eyes can signal sexual interest.

Used right: My coworker told me she had two doctor’s appointments in one week, but my guess is she’s interviewing for other jobs ?? 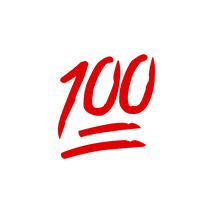 What it means: Sure, this emoji can mean a perfect score on an exam or assessment, but more frequently it indicates approval. The most common use translates to “keep it 100,” or “keep it real.”

Used right: The pasta in the cafeteria was ? today, wow

As a general rule, be wary of using emojis that are not reflective of your own race. That may be seen as offensive.

As for the frog emoji, keep in mind that the alt-right has coopted the frog, specifically the cartoon Pepe the Frog, as a symbol of white supremacy. If you’re texting about an actual frog or a trip to a zoo, you should be in the clear.

Perhaps the biggest potential emoji landmines are the sexually suggestive ones. The basics: An eggplant is shorthand for a penis; a peach translates to butt; and an apple is sometimes used to refer to the behind, as in “apple bottom.”

The drooling face emoji indicates sexual “thirst,” as does the trio water droplet emoji (which, as if things weren’t complicated enough, can also refer to sexual fluids. Ditto the volcano emoji.)

Also a right-pointed index finger emoji placed next to an “OK hand” emoji (the index finger made to form a circle with the thumb, while the remaining three fingers are pointed upwards) translates to sexual intercourse (??).

Finally, the emoji of the building with a large “H” on it and a heart is not a hospital, but a “love hotel,” which is a pay-by-the-hour venue where, well, you get it.

What are they trying to say? Here are all the meanings of popular emojis your kids and grandkids are using these days.