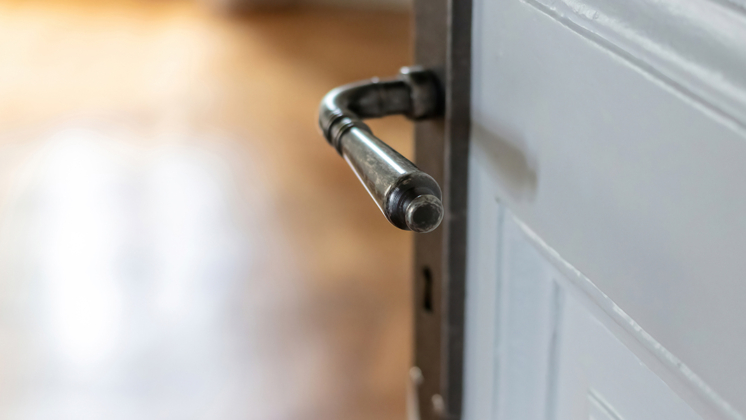 I was sitting at home in my apartment with the front door locked when, out of nowhere, the door flew wide open. Being a regular viewer of Law and Order, I immediately feared the worst — an axe-wielding lunatic had finally made an appearance. I was toast.

After I re-emerged from under the covers and found that no one was there, I began to investigate. As it turned out, my flimsy wooden doors were expanding and contracting due to the changes in temperature caused by the brutal New York seasons. It was such a cold night that the wood had shrunk to a point where the lock had disengaged. A sudden gust of wind had forced the door open (and had almost given me a heart attack).

Unsure of what to do, I turned to my friend Mr. Google. A few clicks later, I discovered a great product for not only my situation, but for a variety of safety-related scenarios. The DoorJammer is a portable, no-hassle door barricade that doesn’t need a fitting tool or any door modification to install. This small security gadget is used to prevent doors from being kicked in. Or, in my case, being blown open by a light breeze. The DoorJammer weighs under two pounds, but can withstand the force of a pick-up truck.

The DoorJammer was great for my apartment, but it was also helpful to take on vacation. Staying alone in hotel in London, I wanted to feel extra secure and the DoorJammer can be taken on flights in carry-on luggage.

It can also be useful in more extreme situations, like in the tragic case of an office or school shooting. The DoorJammer can be a lifesaver to anyone dealing with domestic violence. If you wish to send a gift to a women’s shelter, this would make a great donation.

In case of emergency

The DoorJammer is designed to stop people from getting into your home. But what if you actually need people to get in, in the case of a fire or another emergency? In the UK, where the DoorJammer was invented, the company demonstrated the product to fire service professionals. They agreed it would not prevent them from breaching a door by its hinges.

Take a look at the video below to see how easy the installation is.

The stuff nobody tells you about a dying pet

The death of an animal companion is unique to any other kind of loss.

12 Unique Ways To Memorialize Pets That Have Passed On

Pets become a central part of our lives, and when they pass away we grieve and process the pain differently. Some people need more time and want to find a way to honor their deceased pet. Here are 12 unique ways to pay tribute to that special bond you shared.